Nam and Abby Get Married Twice 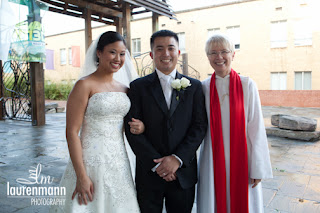 I got to be at both of Nam and Abby's weddings and they were both special for the wonderfully happy couple who have consciously grown their love to embrace their very different cultures and faiths.

On Friday was Abby and Nam's Vietnamese ceremony at a family member's home.  Here is their wonderful photographer, Lauren Mann taking their picture after the ceremony.  The great pictures in this blog are the ones she took.  The so so pictures are the ones taken with my Droid. 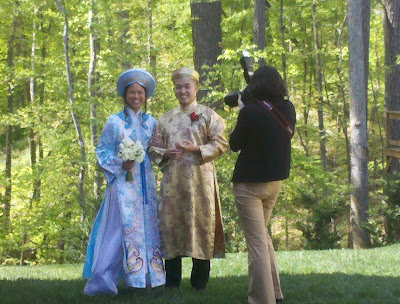 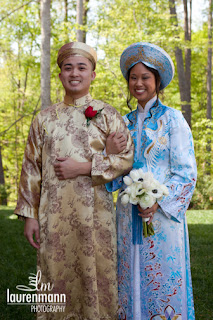 Abby's parents and family are from the Philippines with a wonderful Catholic and cultural heritage. Nam's family is from Vietnam who have kept their rich Buddhist heritage and Vietnamese customs alive, too, especially during important times, like weddings. Nam and Abby wanted to honor both their traditions and they did, with great rejoicing by the combined families who had come from Florida, the Philippines, and even Italy to be with them.

Their Vietnamese wedding was a beautiful family oriented ceremony in which both families were honored with gifts, and prayers were offered for Nam and Abby's marriage.  Below is the family procession into the house. 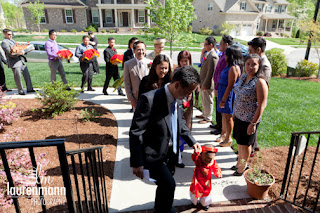 Below are my pictures of the altar set up for the Vietnamese ceremony. 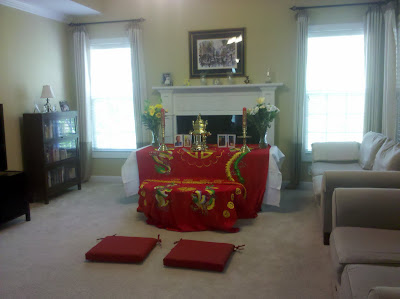 Nam and Abby and Nam's parents knelt on the cushions you see before the altar. Below is a close up which shows the pictures of their grandparents. 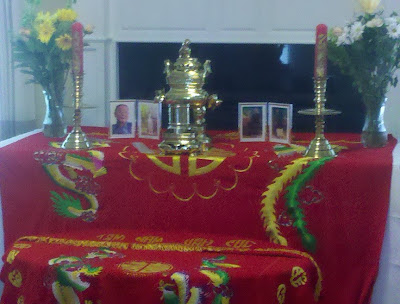 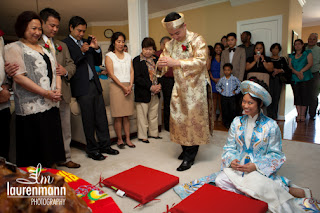 This was a much smaller wedding for only close family on both sides. I loved being invited so that I could offer the continuity between both their ceremonies. In the second ceremony on Saturday I spoke of the Vietnamese ceremony we had had the day before. 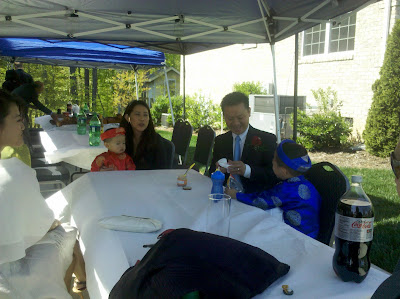 The celebration was outside under tents had lots of family laughs and really good food! And these beautiful little boys in their traditional Vietnamese wedding garb.

Then on Sat, yes the same day as the tornadoes, Abby and Nam married at Marbles Kid's Museum in downtown Raleigh. The tornadoes had roared through not two hours before so there were no traffic lights downtown and no electricity at Marbles.

I was lucky to get there on time because my Sweetheart, Ruben, talked me through downtown on my cell phone while he was looking at Google maps with the traffic overlay, so I missed all the bad spots.

All went amazingly well without electricity. We were all a little warm but had my battery operated amplifier and the DJ's backup IPOD for music and sound. Randy Bennett of Joe Bunn DJ Company is always a joy to work with, and so professional, was even more so that day with all we had to contend with to ensure that Nam and Abby's ceremony went seamlessly.

Here is Nam placing Abby's ring on her finger. 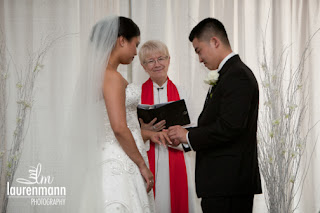 These bridesmaid's dresses were amazing.  They're called Magic Dresses or something like that since the bodice can be tied in several different ways that are all beautiful.  Abby and Nam's colors of ocean and red really were fabulous in this neutral setting. 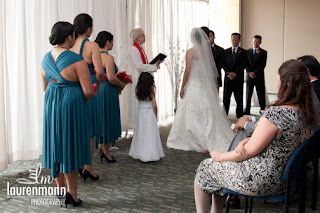 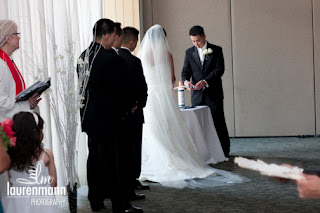 Here is a closer picture of Nam and Abby's unity candle, lit by their mothers at the beginning of the ceremony. They also had a traditional Filipino ceremony with a veil, cord, and coins that I hope to have a picture of a little later. It was beautiful. 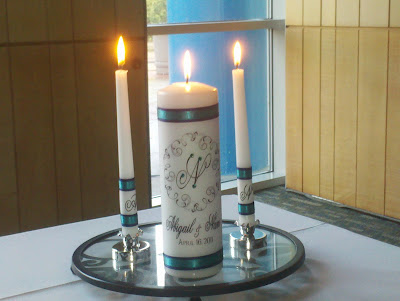 Their reception at Marbles was gorgeous in their colors red and ocean blue. An the staff really rose to the occasion. My only concern was with no electricity, and no backup generator, they would soon be in the dark. Apparently at 8:30 when they had to leave Marbles, because of no electricity (Marbles had no electricity even the next day), they went to a guest's condo in downtown Raleigh to continue the celebration. I'm so glad because Nam and Abby are a wonderful couple who had planned for this celebration for well over a year. 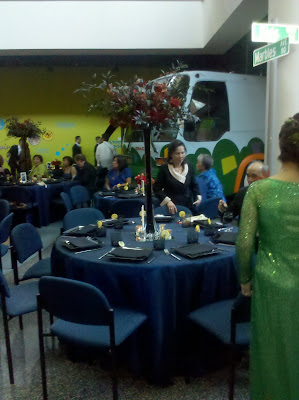 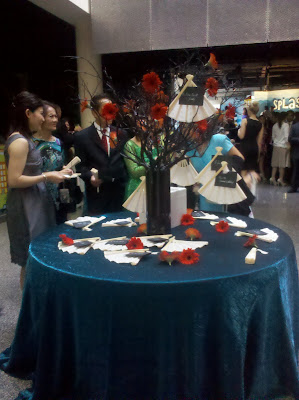 Picture taking outside after the ceremony was damp but possible and we knew we were racing the clock. 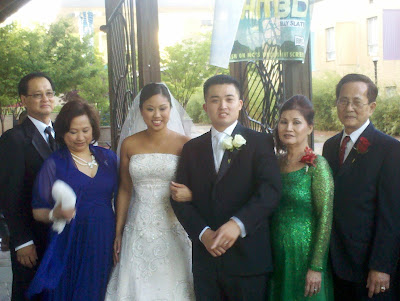 Here are Nam and Abby looking wonderful with their parents after the ceremony. I took this picture so that's why it's hazier.   I so appreciated the balance and calm of Abby and Nam during the whole day as they navigated what must have been big disappointments. They're a wonderful couple. Nam wrote me to say, 'Hi Robin, Thanks again for all that you've done for us (even with the craziness on our wedding day). We are very grateful to have had everything work out the way it did.

I'm glad they were pleased. They have grown their love consciously and have formed a strong bond that even tornadoes can't shake up. Blessings to them. 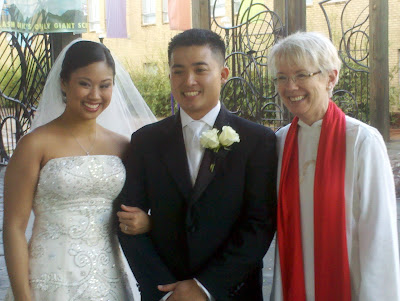 Celebrate Your Love!
These are just a couple of the years during which couples chose me as a leading wedding officiant in the NC Triangle Area.

Each couple I married has a distinctive personality and their wedding its own flair. In this blog I highlighted how some couples chose to make their day special, and the wonderful local wedding professionals that help their dream come true. I hope it offers you insights and inspiration in planning your own wedding. I have loved marrying them.

with Brian and Kristen at The Carolina Inn

Rev. Robin Renteria, M.Div., PhD. Retired
Barcelona, Barcelona, Spain
I'm a retired Unitarian Universalist minister. Between 1994 and 2016 I married loving people of all faiths. I have one blog which celebrates only a few of these ceremonies. After my husband and I retired in 2016 we moved to Barcelona, Spain and we love it. My other blog is to respond to questions about our move to Spain, our life here, and our passion for travel on this very precious planet.